Monet’s gardens at Giverny look like his paintings, with splashes of red and purple, dabs of blue, and whole patches of sunflower yellow everywhere you look. Some flowers tower over you, while others stretch out right into your face. 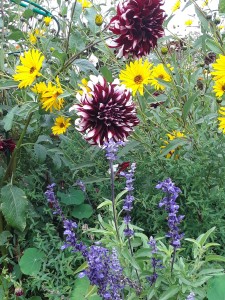 A wide path with plant-covered arches leads to the front door of the pink farmhouse with its green shutters.

A sunny yellow dining room and blue delft tiles in the kitchen invite you to come in and explore. 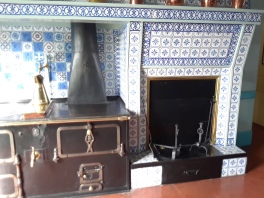 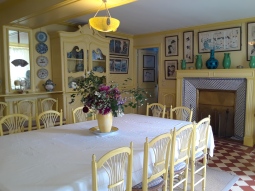 To get to the lily pond, we crossed under the road and followed a wooded stream that helped form the pond.

The stream didn’t have enough water for Monet’s plans, so he built ditches to divert more water from a nearby river. His neighbors worried that there’d be no water for their cows or that Monet’s imported water lilies might even poison them, so Monet had to get approval from the town council to complete his lily pond.

Weeping willows overhand the pond, and water lilies crowd each other for room to grow.

Between rafts of water lilies, reflections of the willows and other trees and flowers catch the sunlight. The Japanese bridge is really there in among the willow branches!

We found spots that looked a lot like paintings we’d seen in Paris. Here’s one of those next to a water lily painting by Monet from the Marmottan!

Walking along the stream to the pond, we passed a field where cows grazed, a field similar to where Monet painted his haystack series in the fall and winter of 1890. Some of the haystacks painted in the winter were Monet’s favorite. In the spring Monet exhibited 15 of the haystack paintings with great success.

He painted in the same field, so the composition in each of the haystack paintings is similar—one or two conical haystacks seen against the strong horizontals of trees and houses in the middle distance, with another horizontal line of hills in the far distance to form the horizon line with the sky above.

The far hills, the roof tops, and the haystack shadows often contain the same colors and so tie all the parts together. In some of the paintings, the top of the haystack is silhouetted against the sky, and in some (as in this view) the slanted roofs of the houses in the middle distance clearly echo the slant of the haystacks.

In this painting I photographed at the Musee d’Orsay the summer sun warms the stacks and highlights their texture made with thick unblended brush strokes. As in his garden, Monet doesn’t want to tame his brushstrokes to make a formal picture of a haystack. His purpose is to show how light changes what the haystacks look like in all kinds of weather and light. 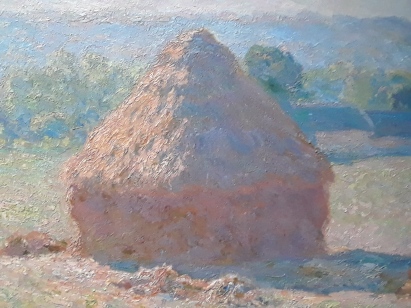 Sunflowers and blue Delft are favorites of Molly, too.

Next Kathythepicturelady post is about Rouen and its cathedral that has survived over 700 years of wars and weather disasters. Be sure and sign up to receive these posts!

After several days in Paris, we left for Giverny and Normandy, and we’d go by train as the Impressionists did. 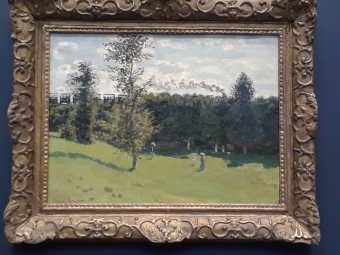 Train in the Countryside, Claude Monet

In the late 1800s trains were changing life for people in and out of Paris. They allowed people living outside the city to come in to work. Weekend trains with double decker cars, as seen in this painting by Monet, took the Impressionists and other Parisians out of the city to relax at restaurants, and popular swimming, boating, and fishing spots.

Trains and train stations show up in a surprising number of their paintings. 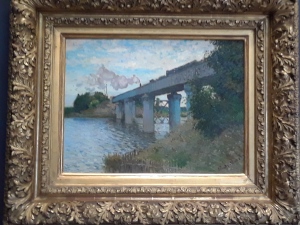 They were a part of the modern life that the Impressionists were determined to show. Which is why Musee d’Orsay, a former train station, is so appropriate as a museum for Impressionist art!

It is Gare Saint-Lazare in the northwest part of the city, where many of the Impressionists lived, that shows up in their paintings. Its trains took people to popular recreational sites along the Seine River as it flows northwest from Paris to the Atlantic. Monet would also have taken the train from there to get to and from small towns such as Argenteuil, and eventually Giverny, where he and his family lived.

Monet painted the station from many angles in a number of paintings done in 1877. His interest was, as always, the effects of light on his subject, and he even convinced the station supervisor to delay the trains and produce more steam than usual so he could paint these effects. In these paintings steam and smoke billow up in tints of blue and pink and gray to the glass and iron roof of Gare Saint-Lazare. Monet’s painting is titled La Gare Saint-Lazare.

Saint-Lazare is still the main station to travel from Paris to Giverny and on to Rouen and other cities of coastal Normandy, so we arrived at the station early on a Saturday morning.

Steam no longer fills the train shed, but people still hurry into the station to catch their trains. Along with many others, we grabbed a croissant and a cup of coffee on our way to the platforms.

A babble of voices impatient to begin their journeys surrounds us. We’re ready, too. Now that we’ve seen the paintings, we’re ready to visit Monet’s home and famous gardens. On to Giverny!

Molly is all packed and ready to go! 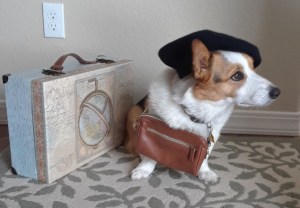 Are you ready to recieve the next Kathythepicturelady post about our visit to Monet’s beloved gardens at Giverny?