Stone—heavy, durable, hard to carve into blocks or statues. Part of a Gothic cathedral, though, it can soar to great heights, as well as form thin, decorative tracery around rose windows.

Built all over Europe in the Middles Ages, these vast churches have defied wars, storms, and fires, as we’ve so recently seen with Notre Dame in Paris! Inside, its stone columns still run up and fan out to someday support a new vaulted ceiling. Outside, Notre Dame’s flying buttresses still arch back against the cathedral and will again, we hope, counter the outward thrust of a new roof.

Thinner stone walls could hold huge windows of stained glass, opening up these cathedrals to a beautiful light that some have called heavenly.

The stained glass and statues helped generations of mostly illiterate people learn the story of redemption. 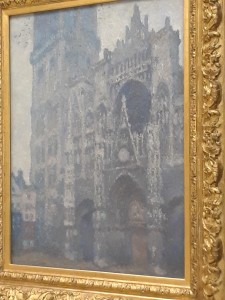 the cathedral had stood solidly in that same spot for over 700 years! So he was able to return after a year to finish the series.

Hay—light, perishable, blown to and fro by the wind. It grows for a season and is then easily cut and formed into a plump haystack to dry. Although necessary for feeding livestock, hay stacks don’t soar toward God or let in heavenly light to tell God’s story. 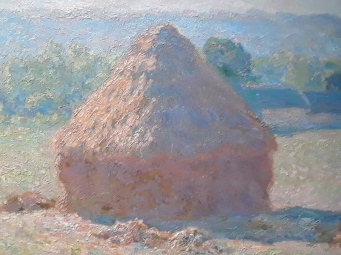 They aren’t permanent either. Monet began his haystack series in the fall, but continued so long into the winter that the farmer needed the hay to feed his cattle! Monet had to pay the farmer to wait while he finished his paintings.

So if asked which has more spiritual worth, a cathedral or a haystack, most would choose the cathedral.

Yet in the summer of 1806 the prayers of five Williams College students did soar up out of a haystack to God and helped begin the American mission’s movement that sent 1000s of men and women to spread the gospel throughout the world. There had been recent Christian revivals in America under George Whitefield, Jonathan Edwards, and others, but up to this time, no one had considered taking the gospel to other parts of the world.

But Samuel Mills, a student at Williams College, had begun to pray about it. And on a Saturday afternoon in August he and four other students gathered in a field off campus to discuss and pray about missions to foreign lands. Williams College is in the postcard-pretty Berkshire Mountains of western Massachusetts. Vibrant autumn foliage soon gives way to winter snows, so by August haystacks begin to dot those fields around the town and college.

That August Saturday in 1806 a thunderstorm rolled down out of the mountains and lightning crackled over the fields, sending the five students under a haystack for shelter. They continued praying, and the Haystack Prayer Meeting, as it came to be called, continued weekly after that.

Within just a few years, Mills, along with other students, had helped encourage the founding of the American Board of Commissioners for Foreign Missions which sent the first American missionaries to India in 1812. One of those, Adoniram Judson, was a friend of Mills from when they both attended Andover Theological Seminary. Mills also help found the American Bible Society and The United Foreign Missionary Society.

Monet made beautiful paintings of the fleeting, superficial changes that light brings to haystacks and cathedrals, but the objects aren’t really changed, and even stone cathedrals don’t last forever.

But when God’s light comes, it can even transform a haystack into a cathedral in which His heavenly light illumines and leads regular people, like college students and us, to take the gospel light to our neighbors, and around the world.

Then these people of God become temples of the Holy Spirit, and they will live forever!

Are there people in your neighborhood or others you keep in touch with who need to receive the light of the gospel?

Molly is taking a much deserved break from photo shoots, but if you sign up for  Kathythepicturelady posts, you’ll soon see some of the funnier photos from her Molly-in-France series!

The next post will be an Impressionist-inspired kid’s art project for Mother’s Day. Don’t miss it!