For me, the hardest part of winters in the Northeast wasn’t the cold and snow, but the short days. By November it is dark by 4:30, and I found that depressing. By January, even though it’s often colder and snowier, I happily counted up a few more minutes of daylight each week. Living now in Texas, I don’t think about it as much, but a friend’s recent facebook post celebrating the longer days reminded me how much many of us appreciate light.

When it comes to art and light, many people think of the Impressionists, but there was a group of artists before them who used light in a uniquely Christian way. They were the Hudson River School artists, America’s first major homegrown artistic movement. Used in this way, “school” means a group of artists who paint in a similar way. They often know each other, paint in many of the same areas, share ideas and techniques, and exhibit together. (We could, just as correctly, say the Impressionist School)

Background
As with many names for artistic movements, the term “Hudson River School” was first used in a derogatory way as new art movements from France (such as the Impressionists) were coming into vogue near the end of the 1800s. But the Hudson River School is being rediscovered and the term is now used in a positive way.

It all began in 1825 when the artist, Thomas Cole, took a sketching and painting trip north on the Hudson River, which flows through the Adirondack and Catskill mountains south to the Atlantic in eastern New York. The resulting paintings made Cole famous.
From that small beginning, several generations of landscape artists, (about 40 men and a few women) hiking in Cole’s footsteps, painted landscapes in a similar style throughout the 1800s. Some of them grew up in the Hudson River area, and painted landscapes in that region. They often hiked along rivers and in the mountains, encouraging each other to do direct observations of nature and to make detailed sketches of what they saw. Many of their sketchbooks still exist. 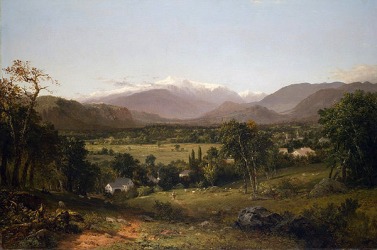 They also went east to paint the valleys and mountains of New England, where Jasper Cropsey became a master at painting the bright colors of a New England autumn. Eventually some traveled even farther, as did Frederick Church, to the Middle East, South America, and the Arctic. Albert Bierstadt is famous for his paintings of the American West. He traveled with exploratory expeditions and helped make the West better known back East. But no matter how far they traveled, most returned to build their homes and studios along the shores of the Hudson.

Olana, built by Frederick Church, is an example of these. The house, its grounds, and view of the Hudson are worth a visit.

Let’s look at the things that are common to most of these landscapes. Since Cole was the school’s founder, a painting by him, View from Mount Holyoke, Northampton, Massachusetts—The Oxbow, can help illustrate common themes and techniques. It shows a wide, panoramic view of a river, distant mountains, and lots of sky. A river or a winding path often invites you to “walk” into the painting, and along the way you see lots of realistic details of plants, rocks, and trees. Unlike the Impressionists, who used light to dissolve outlines, the Hudson River School artists used light to reveal the form of things. You don’t have to step back to get things in focus with these paintings, but you might want to, so you can appreciate the view!

In many of these landscapes there will be a few people and/or animals somewhere in the foreground (often with touches of red, of course!). But figures and buildings are small or even absent, because Hudson River artists were critical of the man-centeredness of much art. They wanted instead to show man’s need of God. Those shown are everyday Americans or Native Americans, not mythological figures, and they are sometimes shown hiking or resting, because getting away to enjoy nature was believed to be good for people. Today we would agree, but often only think of the physical benefits. In the 1800s many believed that the spiritual benefits were even more important.

In this painting Cole is, himself, in the foreground painting. (Artists have always liked to put themselves in their paintings, and they especially like to paint themselves painting!). You may also notice his umbrella.

In Hudson River School paintings you’ll see contrasts: storm clouds and wilderness on one side, pastoral peace and clear skies on the other; a dead or storm-damaged tree next to one that is flourishing; and carefully-rendered detail in the foreground, opening up, depth after depth into vast distances that take us beyond this world to the heavens. 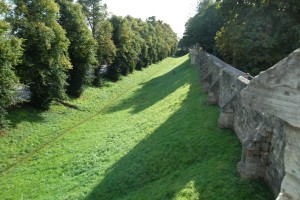 Above all else, the thing that says you’re looking at a Hudson River School painting, is the way they used light to draw you on into the mountains and beyond. Many of you are familiar with 1-point perspective, where the parallel lines of a road or wall recede at an angle, converging at “one point” on the horizon, and creating the illusion of distance.In a Hudson River School painting all the lines converge at a vanishing point that is lost in light, so it seems as if we can see beyond nature to infinity—to God who created all that beautiful nature. And that’s just what these artists wanted, as shown in their writings. Jasper Cropsey wrote that the sky was a beautiful gift of the Creator and encircled the earth “like a halo.” And John Kensett wrote of the “beautiful harmony in which God has created the universe.”

Here and scattered throughout this post are some paintings by some of the better-known Hudson River artists. See how many of the common themes and devices you can find in each one, but also notice how each artist expressed his own individuality. 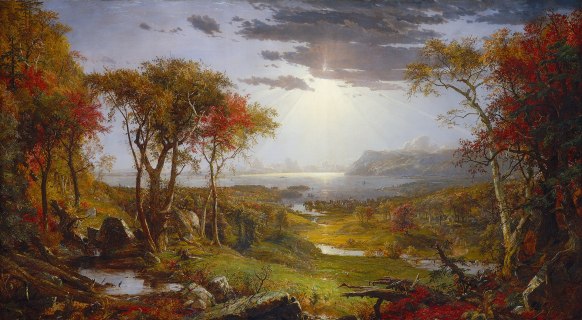 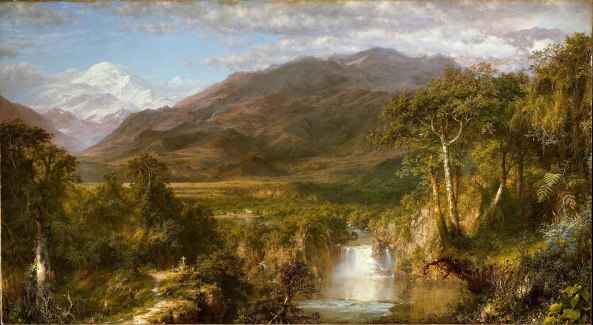 Another, less common, type of painting from this group is of a small private woodland scene, with over-arching trees as in a cathedral. But even these usually open up to a view into distant light.

Many of the Hudson River School artists were Christians 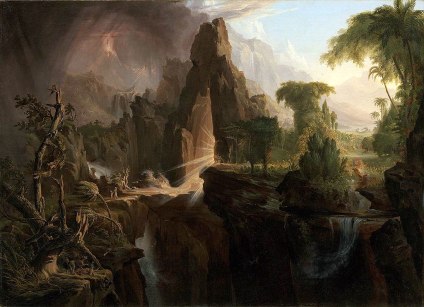 Expulsion from the Garden of Eden, Thomas Cole, public domain

and painted subjects that are obviously Christian in content, such as Cole’s Expulsion from the Garden of Eden, but they also wanted their light-filled landscapes to teach lessons about Christianity. A leading Hudson River School artist, Asher Durand, wrote that nature teaches many “high and holy” lessons, which are “only surpassed by the light of Revelation.” (by “Revelation” he meant God’s Word)

Some of these “high and holy” lessons came from very down-to-earth things. The beauty of the landscapes and the realistic details of foliage, skies, and clouds weren’t just to celebrate nature, but to show God’s glory and power in creation. Mountains were to remind viewers of Mount Sinai and the giving of the Law, and surely of these words from Psalm 121, “I lift up my eyes to the hills—where does my help come from? My help comes from the Lord, the Maker of heaven and earth.”

Water was a symbol of rest and of baptism, and the dead tree shows that this world, as beautiful as it looks in these paintings, is darkened and dying due to man’s sin. Some of the artists grew up in the Dutch tradition and were familiar with the use of insects, half-eaten food, or even skulls to show a similar idea in Dutch still lifes.

Most important of all is the light. Hudson River School artists deliberately used light to symbolize many of the major teachings of the Bible. To remind us:

of the Creator, Himself:
“This is the message we have heard from Him and declare to you: God is light; in Him there is no darkness at all.” 1 John 1:5

of His work of creation:
“Now the earth was formless and empty, darkness was over the surface of the deep,
and the Spirit of God was hovering over the waters. And God said, ‘Let there be light,’ and there was light.” Genesis 1:2-3

of His continuing grace and providential care of His creation:
“The Lord does whatever pleases Him, in the heavens and on the earth, in the seas and all their depth. He makes clouds rise from the ends of the earth; He sends lightning with the rain and brings out the wind from His storehouses.” Psalm 135:6-7

of His guiding hand as we travel the sometimes dark paths of this world:
“You, O Lord, keep my lamp burning; my God turns my darkness into light.” Psalm 18:28
“Your word is a lamp to my feet and a light for my path.” Psalm 119:105

of the light of salvation breaking over the world in the coming of Jesus:
“The people walking in darkness have seen a great light; on those living in the land of the shadow of death a light has dawned.” Isaiah 9:2
“…my eyes have seen your salvation, which you have prepared in the sight of all people, a light for revelation to the Gentiles and for glory to your people Israel” Luke 2:30-32
“In the beginning was the Word and the Word was with God, and the Word was God. He was in the beginning with God. All things were made through Him, and without Him was not anything made that was made. In Him was life, and the life was the light of men. The light shines in the darkness, and the darkness has not overcome it.” John 1:1-4
“Again Jesus spoke to them, saying, ‘I am the light of the world. Whoever follows me will not walk in darkness, but will have the light of life.’” John 8:12

And of the restoration of all things when Jesus returns:
“Arise, shine, for your light has come, and the glory of the Lord rises upon you…. Nations will come to your light, and kings to the brightness of your dawn.” Isaiah 60:1-3
“I did not see a temple in the city, because the Lord God Almighty and the Lamb are its temple. The city does not need the sun or the moon to shine on it, for the glory of God gives it light, and the Lamb is its lamp. The nations will walk by its light…..” Revelation 21:22-24

As you read these verses, look back at the paintings and decide which verse/s best fit each. Paintings such as these are beautiful in and of themselves, but even more so as they point us to God, our Creator, Sustainer, and Savior. Thomas Cole once wrote, “Art, in its true sense, is, in fact, man’s lowly imitation of the creative power of the Almighty.”

May the Hudson River School paintings help you see the sacred lessons that surround you each day in your Father’s world.

The above paintings and details are used solely for educational purposes.